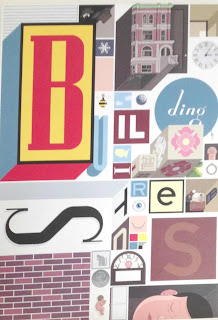 A child of the UK and Australia, I never really got into comics (I am not sure if there is any relationship between those two phrases, when looking at them after I typed them. But I feel that at the time I was young (OK, the {late - vanity}50s and 60s) comics hadn't got much beyond the very ubiquitous Phantom and Superman). Though I did read the comic sections of the newspapers.

As time went by I observed the growth in the genre and its maturing - the switch from Batman to the Dark Knight for example. But by then I was too 'mature' to think of reading thngs like the Sandman and others which are now presented as classics of the developing genre.

But I was always intrigued, and bought the McSweeney's issue that celebrated comics (number 13)- partly for its excessive production but also out of interest. And I enjoyed it heaps.

Chris Ware edited it, seemed like a key figure in the graphic novel area, and had won prizes for Jimmy Corrigan Smartest Kid on Earth - which had called to me when it came out but I had resisted. Resist no more.

What I found was a complex, intriguing character study, with historical aspects, plus using the graphic side to create diversions (such as models you could cut out a build if you wanted to destroy your copy) and to make knowing nods to the format. It is very episodic which reflects its creation as separate vignettes. But a complex and satisfying read. And look. And it looks great - Ware has a spare flat style that carries the whole so well.

So when I heard about Building Stories it was a no brainer:

It is a colection of stories based around a building and centred on four inhabitants: a married couple, the elderly owner, a single woman (at the start) with a single leg, and a bee. The stories intersect at times and cover many years.

One of the many pleasures is deciding what order to read them. This reminds me of the other book-in-a-box, B S Johnson's the unfortunates (he is a postmodern pioneer) from 1969 whre the sections of the book can be read in any order other than the first and last. With Building Stories it means that you are also having to 'build' the characters stories as you go - is this earlier or later than the bit you read before? Ah, that explains the other section etc. No one reading is prioritised and a sequential order might not even be possible.

Again, reflected in the variety of bits, he plays with conventions on how to read the individual works - some requiring rotating the book or following lines, or understanding the base structure so that you can follow the panels.

But beyond the pleasure of the thing, the story is also excellent. Ware tends seem negative - there is a lot of unhappiness in this and Jimmy, and it is also reflected in his comments in the Acme sketchbook of his I bought. But many stories are sad, and this is not bleak. Each individual is drawn (literaturally and literally) in details which grow and develop. You become engaged in their lives and fortunes - and may even search the bits to see what happened next!

It may be a comic format, it may be in a box, but what it is is a well written series of short stories. A pleasure on many levels