The first batch of new reviews - I have grouped these Eh? releases because they seemed to have something in common and yet be distinct. The main feature is that they are relatively restrained, closer to the ambient end of freeform, and also are not instrumental groups as such. 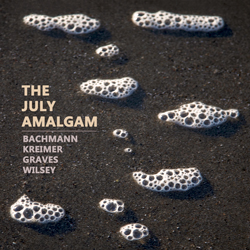 The July Amalgam (Eh?74): this album is in two parts. The first half is Wilsey, Kreimer and Graves playing on July 6 while the second substitutes Bachmann for Wilsey on the seventh. There is no detail on the disk about who plays what, and a web search was not much more helpful. Which has the advantage of listening to the sounds and letting them speak for themselves. The instrumentation seems to include things to bang and pluck, scrape and pling. There is perhaps some electronics - at times there are some deep tones coming through.

The first part, with 6 shorter pieces, seems a little more active, though both are quite restrained in their development. There is a track with a sound like paper being scrunched on it, another has something that is almost like a sample of one of those barrels of laughs, and some feedback. The 3 longer tracks in the second part develop more slowly and spaciously (spacily?), again there are some electronics, hints of voices, tones, uncertain sounds like crackling water.

This album appealed to me as a nice abstract work to have playing in the background or to let move into the foreground. The pieces meander through their course, not trying to approach the state of music, but more an air of focussed intensity that develops into its own space. 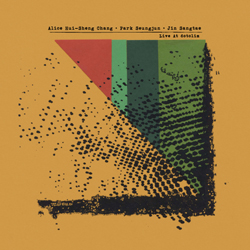 Looking on the web, dotolim seems to be a small venue for live webcast performances. Alice Hui-Sheng Chang, Park Seungjun and Jin Sangate performed their live at dotolim in Jan 2010 (Eh?70). Park and Jin provide a backdrop of ambient whitenoice crackling electronica through spring reverb, speaker, standlight, hard disk drive, radio and PDA. This varies in intensity and volume, although generally restrained and quiet sometimes plucky, others pulsing. The key to the release is Alice's voice - she is credited with 'extended vocal technique' and she has quite a range - sounding at times like Yoko Ono, Tuvan throat singers, quavery tones, moaning, a sax and more. The group move through their 48 minutes rising and falling, building and releasing, in a work that again provides a thoughtful mood. 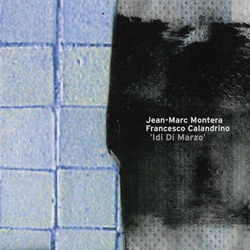 And then Jean-Marc Montera on guitar and fx and Francesco Calandrino on lofi stereos, manipulated audiocassettes, field recordings, clarinets recorded on 1 March and release on 'Idi Di Marzo' (Eh?64)(mysteriously as, as the Italian hints, Idi is ides). Their album together is quite a slippery beast though. The first track has scraping and rapidly played guitar over a protean bed of electronica that shifts and cuts like an audio whirlwind - buzzing crackling whining, samples emerging briefly, though a longer choir sings. Things get more restrained in the next track, with a hint of Calendro's clarinet which becomes more obvious on subsequent pieces, particularly track 4. As you listen your mind focusses on the electronica - the child's voice or the whooping in 3 perhaps - and then to the guitar which uses a range of tricks (scraping, percussive, treatments) and straight playing in varied styles. The balance between the 2, and the interplay, is well judged and satisfying. There is also a flow to the album - as it moves to the conclusion it passes through a noisy ragged track 5 with voice samples more prominent and then the more rocking conclusion of track 6.  This is a driving album, which pulls you along and demands that you listen to it.

After finishing the review I realised that the albums are perhaps more different - if I had kept it at 2 we would be fine with a tying together here. July Amalgam and Dotolim both have a quiet earnestness - I see these groups sitting playing with serious faces to a group of intense audience members, they work the silences and subtly modulate; while in Idi there is more excitement and extravagant drama. I am not a ranker: each of these albums works its field skilfully and is satisfying in their own way - either as ambience or as pummelling noise.