OK - a person not a thing, but then Tom Phillips isn't in my room, he is a presence.

My memory of his entrance into my mind starts with non-knowledge: I had King Crimson Starless and Bible Black and Eno Another Green World without realising that the covers were by Phillips.

A synchronicity of sorts happened while I was in Canberra. There was an article about him in The Age Monthly Review, I found a copy of IRMA (Gavin Bryar's version of Phillip's libretto & score - he doesn't like this, but I love it) which was released on Eno's Obscure Records so I bought it, and the National Gallery had The Heart of A Humument in their shop.

Which brings us to what is his signature work - A Humument. He has taken a Victorian novel Mallock's A Human Document and with a mesmeric obsession excavated it. The Humument itself is in it's fourth edition - the first included every page of the novel as transformed by Phillips. Each page is a miniature marvel. Here is one at random drawn from the web. 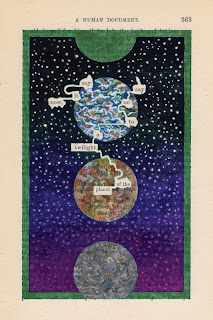 Text is extracted to make a minipoem and an image drawn around it. These can often reflect other aspects of his work, other themes. The text has been used in a variety of other works - IRMA is based on texts suggesting sounds, words and moods to create the score. Since the first edition there have been 4 more, and with each some of the pages have been changed so that by the next edition no page will be the same as the first. I now own four versions of this book, plus that original The Heart of A Humument which takes small central fragments and creates even smaller images.

Much of Phillips' work comes from obsessions or concepts - and while much conceptual art doesn't work, I always find his does. These include paintings based on recreating postcards, or specific parts (such as a series of Union Jacks as seen in cards); coloured edges and components based on recycling old paint and I Ching sequences; the Mappin Gallery where he took a postcard of an art gallery and recreated the individual painings as full size - and then recreated the whole room; 20 sites in N years where he goes back to 20 spots in a walk round his neighbourhood and photographs the same view from a fixed spot, creating a view of the changes.

Others of his books that I have are
The postcard century - for each year to the 20th century he curated a selection of 20 cards from his collection, providing a visual history of changes but also recurring tropes.
Works.Texts.to 1974 - This essential text combines 50 Recapitulatory Paintings 1962-1974, which are recreations of works from this period in the size of the book, with reprints of the originals and short text, with essays and images about specific works (Benches, Mappin Art Gallery) or themes (Flags, Berlin Wall). Plus a little about photographic projects and all of his music scores (including the IRMA score [mined from Humument])
Works and Texts - from 1992, this covers some of the same ground in terms of the essays, but brings the artworks up to date, and is larger scale with better production. This one is easier to get, but both are essential.
Dante's Inferno: he translated the Inferno and provide 4 illustartions for each canto, all including worked extracts from Mallock and extensive notes. This was also made into a television series (A Television Dante) with Peter Greenaway
A Humument for iPhone (there is also an iPad version which would give a better experience because of the screen size, but I didn't own an iPad) - go to the app store.

The books give me many happy hours - looking at the pictures, reading the poems in Humument or rereading the texts about how some of these works evolved. The blog is worth following - a high point was when Phillips was creating a multipanel piece and showing pictures of it as it grew and changed. I have been fortunate to see some Humument pages and otehr works in a show in Canberra years ago - to my mind Phillips is not sufficiently celebrated, and I don't know why.

Where to end? A portrait of Brian Eno seems appropriate.

(Note - I have put in links to the relevant pages of the Tom Phillips site - it is a brilliant and detailed beast. Other links are to Amazon where you can see more detail about some of the trade publications).
Posted by Unknown at 5:30 PM