So many people making good music across the world - as with the Knife, how you find them can be serendipitous.

I came across Dave Stafford after getting Scape (the app) and wondering if anyone had posted about how it works - what are some of the decision processes. Anyway, I found the best discussion was by Dave, and over the course of a few blogs he described his developing skill and excitement with it. I commented on that blog & later ones on other related topics. Followed him on twitter. A piece he wrote on the anniversary multidisk Larks Tongue In Aspic set indicated we had similar tatse.

The he wrote a long piece on Prog Rock and I could see he was a couple of years younger than me, but his muscal taste and development were similar to mine (though he is a music maker) though he got into more diverse groups and saw more live than me. And looking at his discography I could see an homage to Consequences. More comment exchanges followed. 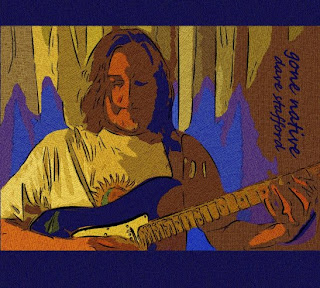 So I decided that I really out to buy and listen to some of his music. So I went for Gone Native, the most recent and one described as reflecting his guitar prog rock side (the title of the website/label PureAmbient gives a hint to his broader range).

So I bought the album - electronic download. While I was there I also 'bought' the 2 free compilations that pull together works primarily by Dave and some of his collaborations. I highly recommend both as giving a good taste of the diversity of his styles: in addition to looping ambience, there is crafty guitar work, prog and experimental and more.

Anyway, Gone Native immediately lets you know where it is going - the opening Thanks, frank bursts out of the speakers with a ripping guitar solo over a crackling drum and bass support. Yes, this is driving ecstatic rock. Now guitar histrionics were never really my thing with prog rock (keyboard, flute, strings maybe) but exposure to Fripp, Nelson, Oldfield broadened my interests and across the album there is a range of guitar styles and approaches so that it is not a tiring testosterone fest. What it is a joyful exploration of various forms which include guitar (and many explorations within that including loops, e-bow, different stylings - you cdan hear hints of influences, but always incorporated and refreshed through Stafford's ear and own style).

For example Caladan is a eastern baroque piece with serpent-like woodwinds, the title track opens with cello and a rhythm loop and then builds before returning;. Whatever souls are made of is more ambient, and returns with an ambient mix later, there is an eponymous guitar line in Sinuous thread, and the bass of Wettonizer is reflected of the name and has hints of King Crimson. The first part of the album is quietly concluded by Flying solo which has a gentle guitar solo with a more aggressive piece in the middle and then a gentle fade.

And at this stage I would be happy to call it a great album - energetic, exciting, varied and joyful. And don't imagine it is 'just a guitar' album - there are some great synth lines and all sorts of other things happening.

However there are another 7 tracks, which are more ambient (described below). When I first listened to the whole album it seemed to me that there might be a benefit in mixing the tracks and moods a bit. But I looked at the blog and noted a piece about the writing and sequencing of the album.

Basically he sees it as two sides, as in the old album days, based on the music and how it was written. When I saw this the set clicked into focus. I have retitled them disk 1 and 2 (one is about 40 minutes, the other 30, which is more like a disk than a side) and I consider one the rock album and the other ambient. Within the first album there is a relaxing of the mood as you go through - but by splitting them it makes them work better for me as pieces: I will listen to one of the disks or the other depending on my mood or fancy.

So, on to disk 2. These are more ambient but also active - and recorded in shorter spaces of time. Layered and complex, they have space to explore and develop the possibilities of looping, atmospheric. The guitar (or guitar synth) is still very present - such as the delightful e-bow solo that is Wide open spaces, the stripped to the loops Whatever souls are made of ambient mix, and the processed guitar of Desert power 1 - drone mix. As a literal alternative to the more structured, written pieces on Disk 1, the second disk is passage into a different space (The blog mentions a track called The gemenon blues (long form) which appears to have been dropped from the final running order, which is a shame as it reads as an interesting dark twist!) And whether a Hidden track (named as such) really works on a download album ... there is the period of silence, and it is a nod to the genre.

So to conclude, this is a very satisfying double album - complex driven songs and intricate ambience.

Dave indicated that the album wasn't representative of his range - including the looping ambient side, though Disk 2 is indicative. And so I explored further, to be considered later
Posted by Unknown at 10:00 PM